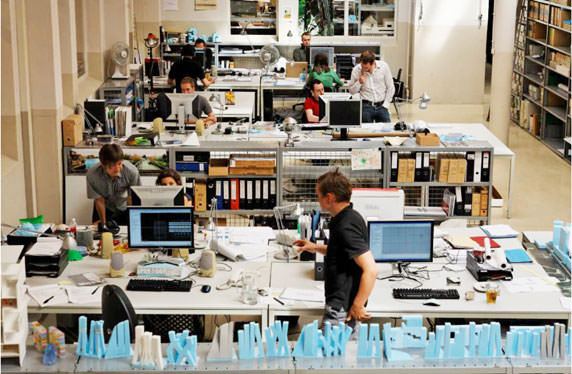 A Design Walk is a guided 2-3 hours tour to 3 local design agencies. Those design agencies has promised to welcome you into their offices, answer your questions and exhibit some previous work. This is a chance to meet great designers eye-to-eye on their home ground and a perfect way for international guests to experience the Rotterdam design scene. Each stop is about 25 minutes.

There are three groups on Friday and three on Saturday and each group contains about twelve participants plus a design guide. The small size of the groups and the bi-lingual guide that accompanies each group will allow you to better interact and discuss with the agencies designers. The groups will visit the agencies in different order and on the Friday walk we will also make a stop outside Boombjes for the flag hauling ceremony.

Studio Dumbar was founded in 1977 and has offices in Rotterdam and Shanghai. The studio is a mix of individual creative talent, ambitious clients and projects from a wide variety of backgrounds. It is renowned for both its cultural, corporate and public projects, such as the visual identity of the Dutch National Government, the much debated poster series for Amsterdam Sinfonietta, the Dutch Police Force, the road signing programme for South Korea, the visual identity of TNT Post and the Dutch Design Awards.

The for Strange Attractors typical combination of historical knowledge/craftsmanship, cultural commentary, formal experimentation and ironic humor result in an endless diversity of items in which the computer is not only used to combine all available different media, but most of all as a craft tool. In the hands of Strange Attractors the digital becomes material again.

Pescatore Frisk and Van Middelkoop give workshops and lectures in cities worldwide and teach at the Design Academy in Eindhoven, the Royal Academy of Art in The Hague, and Parsons -The New School for Design- in New York.

The work of Strange Attractors has received numerous awards, is published in periodicals including TDC and ADC annuals, Contemporary Graphic Design (TASCHEN), Area 2 (Phaidon) and is part of the permanent collection of Museum Boijmans Van Beuningen, Rotterdam.

MVRDV was set up in Rotterdam (the Netherlands) in 1993 by Winy Maas, Jacob van Rijs and Nathalie de Vries. MVRDV produces designs and studies in the fields of architecture, urbanism and landscape design. Early projects such as the headquarters for the Dutch Public Broadcaster VPRO and housing for elderly WoZoCo in Amsterdam lead to international acclaim.

MVRDV develops its work in a conceptual way, the changing condition is visualised and discussed through designs, sometimes literally through the design and construction of a diagram. The office continues to pursue its fascination and methodical research on density using a method of shaping space through complex amounts of data that accompany contemporary building and design processes.

MVRDV first published a cross section of these study results in FARMAX (1998), followed by a.o. MetaCity/Datatown (1999), Costa Iberica (2000), Regionmaker (2002), 5 Minutes City (2003), KM3 (2005), which contains Pig City and more recently Spacefighter (2007) and Skycar City (2007), the latter two will be exhibited at the 2008 Biennale of Venice. MVRDV deals with global ecological issues in large scale studies like Pig City as well as in small scale solutions for flooded areas of New Orleans.

Current projects include various housing projects in the Netherlands, Spain, China, France, Austria, the United Kingdom, USA, India, Korea and other countries, a television centre in Zürich, a public library for Spijkenisse (Netherlands), a central market hall for Rotterdam, a culture plaza in Nanjing, China, large scale urban masterplans in Oslo, Norway and in Tirana, Albania, a masterplan for an eco-city in Logroño, Spain and an urban vision for the doubling in size of Almere, Netherlands.

The work of MVRDV is exhibited and published worldwide and receives international awards. The 60 architects, designers and staff members conceive projects in a multi-disciplinary collaborative design process and apply highest technological and sustainable standards.

All groups start from the large entrance hall on the ground floor at De Doelen 17:15. They will return soon after 20:00.

Tickets for this Design Walk are sold via our web shop.