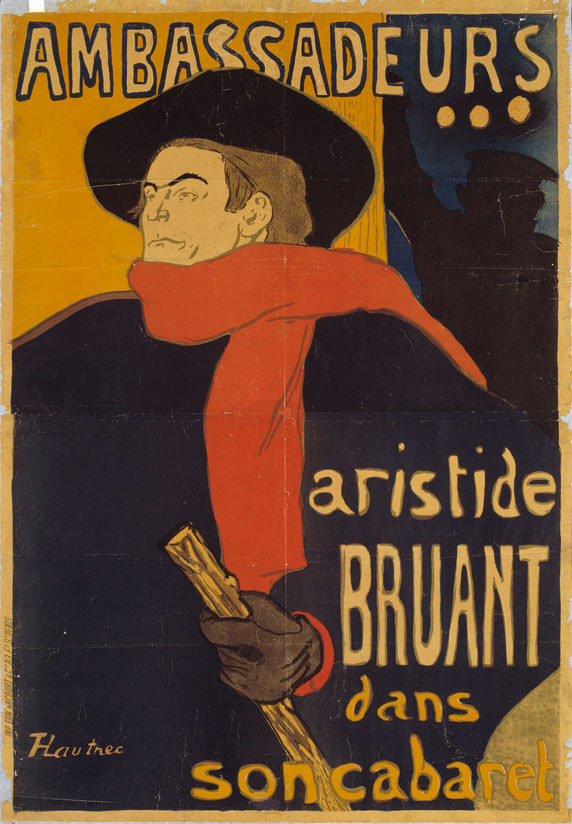 The exhibition devoted to Henri de Toulouse-Lautrec at the Nationalmuseum in Stockholm is the first comprehensive presentation of the French artist in Sweden for forty years. The exhibition will include some 200 items: drawings, posters and oil paintings.

We meet a small but highly imposing artist who abandoned a life in aristocratic circles to spend his days among the bohemian pleasures of Montmartre, portraying the people he met there. His works will be on view at the Nationalmuseum from 21 February to 25 May 2008.

The entire Parisian entertainment world of the late 19th century seems to have been preserved in Toulouse-Lautrec’s pictures from the restaurants and cafés, dance halls and theatres. He is particularly associated with the famous Moulin Rouge nightclub where, for a number of years around 1890, he spent almost every evening recording individuals and events in his sketchbook.

Henri de Toulouse-Lautrec also recorded the lives of women working as prostitutes – how they spent their days and their nights. In his art he seems to vacillate between compassion and detachment. The spring exhibition of his work at the Nationalmuseum will shed light on the economic and social causes of the widespread prostitution during the late 19th century. A further question will also be asked:

What would a contemporary Toulouse-Lautrec have portrayed in Stockholm today? A group of students from Konstfack – University College of Arts, Crafts and Design – have been invited to contribute their personal answers to this question in the form of their own works of art. These works will be shown in the ground-floor gallery, displayed under the name “To use Lautrec”.

A great deal of space is devoted to Toulouse-Lautrec in his capacity as a designer of posters. The emergent entertainment industry of the late 19th century needed marketing and the greater part of Toulouse-Lautrec’s posters were made to advertise. In his posters the artist developed a medium of expression using simple lines and bold colours; an artistic language that points to the future.

Henri de Toulouse-Lautrec’s life describes an unusual social progress from the aristocracy to the darker side of society. He was born into a notably aristocratic family in southern France. It has been claimed that his poor health was the result of inbreeding. In his teens he broke his legs so severely that they stopped growing. He moved to Paris with his mother to study art but was soon drawn to the city’s bohemian neighbourhoods. And it was in the bohemian ambience of Montmartre that his creative talent began to flourish, leading on to a very substantial body of work. But his life was a brief one. Marked by an excess of alcohol and in poor physical condition, Henri de Toulouse-Lautrec died in 1901, scarcely 37 years old. At the end of February we shall be able to acquaint ourselves with him once again at the Nationalmuseum in Stockholm.

PrevPreviousKolla! Graphic Design and Illustration exhibition
NextCreatives Behind the LensNext