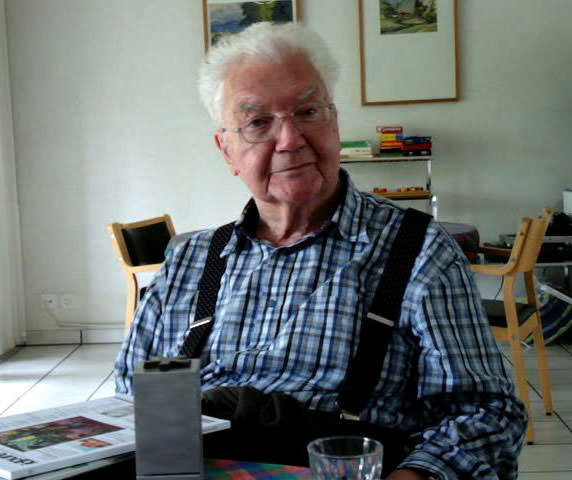 Adrian Frutiger’s acceptance speech for the ED-Awards ceremony in Zürich 2009: Link to YouTube.

Adrian Frutiger (born May 24, 1928) is one of the prominent typeface designers of the twentieth century, who continues influencing the direction of digital typography in the twenty-first century; he is best known for creating the typefaces Univers and Frutiger.

At the age of sixteen, he was apprenticed four years, as a compositor, to the printer Otto Schaerffli in Interlaken; between 1949 and 1951 he studied under Walter Käch and Alfred Willimann in the Kunstgewerbeschule (school of applied arts) in Zürich, where students studied monumental inscriptions from Roman forum rubbings. At the Kunstgewerbeschule, Frutiger primarily concentrated on calligraphy — a craft favouring the nib and the brush, instead of drafting tools.

His first commercial typeface was Président — a set of titling capital letters with small, bracketed serifs, released in 1954. Later that year the Deberny & Peignot type foundry wanted to add a linear sans serif antiqua in serveral weights to the range of the Lumitype-fonts. Adrian Frutiger suggested refraining from adapting an existing alphabet and instead to develop a new font that would, above all, be suitable for the typesetting of longer texts. Using his old sketches from the School for the Applied Arts, he created Univers font, which was published in 1957.

In the 1970s, the French airport authority’s commissioning a “way-finding signage” alphabet for the new Charles de Gaulle International Airport in the Roissy suburb of Paris. Frutiger considered adapting Univers, but decided it was dated as too-Sixties. The resultant typeface, originally titled Roissy, the typeface was renamed Frutiger when released it for public use in 1976.

In the late 1990s, Frutiger began collaborating on refining and expanding the Univers, Frutiger, and Avenir, in addressing hinting for screen display. Univers was reissued with sixty-three variants; Frutiger was reissued as Frutiger Next with true italic and additional weights. Adrian Frutiger’s career and typeface development spans the hot metal, phototypesetting, and digital typesetting eras. Currently, he lives near Bern.